The research is now complete and if you are visiting Attingham in the next few days you may well see exhibits being installed for our upcoming exhibition. ‘Hidden Lives: Royalty, Glamour and War’ begins in the mansion on Friday 1st June and will run for three months over the summer.

Beginning with a new presentation of the 8th Lady Berwick’s portrait painted by Gerald Kelly in 1923, the exhibition uses material from our archives including photographs and correspondence to explore aspects of the 8th Lord and Lady Berwick’s lives based on the themes of Royalty, Glamour and War. Also included are a number of our collection items that link to specific photos or letters being exhibited, many of which are not generally seen on public display.

A particular highlight of the exhibition is the presentation of the robes and coronets worn by the 8th Lord and Lady when they attended the Coronation of George VI in May 1937.

The ‘Royalty’ section of the exhibition also includes letters and magazine articles that give a unique insight into the personal thoughts of the Berwick’s on the 1937 Coronation, plus formal and informal photographs of them at the event. Also included is the photograph of Lady Berwick shown below, taken in 1953. Although she didn’t attend the coronation of Elizabeth II in that year, the photo records her showing her robes to a group of visiting American students.

Lady Berwick In Her Coronation Robes In 1953

The ‘Glamour’ section of the exhibition looks at the fashion sense and style of the 8th Lord and Lady, an example of which is shown in the photo of the 8th Lord below, taken in the early 1900’s. 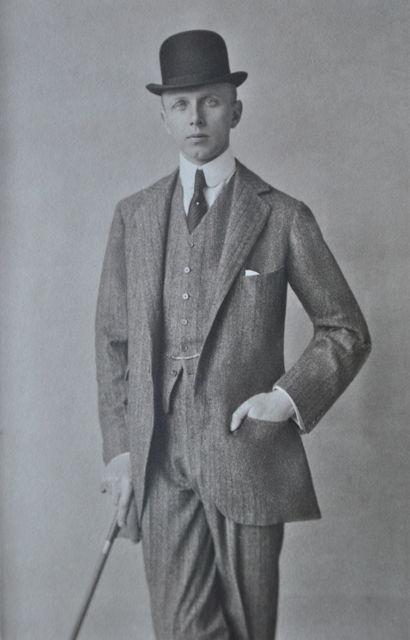 Included in this part of the exhibition are photographs from various society magazines including Vogue, Tatler and Country Life in which Lady Berwick appeared, plus items of clothing that she wore in these photos. Some of her fashion accessories are also on display as are correspondence items relating to Lord Berwick’s involvement with London establishments such as The Carlton Club. Items from Lady Berwick’s involvement with a dressmaking school that she set up in London in 1932 are also presented.

Finally, the ‘War’ section of the exhibition presents material relating to the military connections of the 8th Lord and Lady and of Attingham itself, with a particular focus on The First World War. Lord Berwick’s connections to The Shropshire Yeomanry are explored as is Lady Berwick’s work with the Red Cross on the Italian front between 1915 and 1918, when she was of course still Teresa Hulton.

Lord Berwick’s military uniform is being displayed, plus his campaign medals and documentary records from his war service. Lady Berwick’s Red Cross arm band and certificates are on show, together with letters written to and from her during her time on the frontline. Her Italian war medal, the Croce di Guerre is also on display.

Items exhibited that relate to Attingham’s military connections include photos of the house in use as a convalescent hospital during The First World War and of the estate ground being used for a camping exercise by The Shropshire Yeomanry in 1930. A photograph from this event is shown below.

Information will also be presented explaining our ongoing work exploring material held in our archive. We will explain what this work involves and why it is important and will update you on progress made to date and future activities.

We hope you will find the exhibition as fascinating as we have while we have been researching it and we look forward to seeing you around the house over the coming weeks and months.