As part of the preparation for the Through the Roof Project building work, we have been emptying the Picture Gallery ready for some scaffolding to be put up. As part of this work, the lovely chandelier has had to be moved from the position it has hung in for years.

This is not the original fitting which would have lit the Picture Gallery in the time of 2nd Lord Berwick; it would have then been lit by an Argand lamp . Argand lamps were invented by the Frenchman Ami Argand and fuelled by expensive Spermaceti oil taken from the sperm whale. An Argand lamp was still in place in the Pictue Gallery in an inventory of 1861.

So this is how we took down the chandelier from the Picture Gallery ceiling.

Step 1- Call in the experts!

The team from Crown Fine Arts were called in to do this delicate and important job. Our electrician Norman also went up first to make sure the power was off! 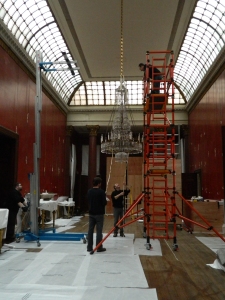 Step 2- Use some modern machinery

The lifting machine was drafted in again to bring the chandelier down. A cross-bar was attached to its forks, ready for the chandelier to be secured.

The cross-bar attached to the lifting forks ready to support the weight of the chandelier.

Step 3- Send one intrepid man up to unhook the chandelier from its chain.

Luckily our chandelier doesn’t unscrew from the top so there was no chance of an Only Fools and Horses moment. The beautiful chandelier can be unhooked from the chain which suspends it from the ceiling.

One member of the team attaching the chandelier to the cross-bar before it is unhooked. 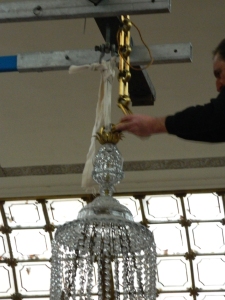 With the weight of the chandelier supported it can be unhooked from the chain.

The lifting machine very slowly lowers the chandelier down.

The chandelier is lowered.

This will be the chandelier’s new home for the next two years. It’s amazing to be able to see such a beautiful piece up close and this box will have a Perspex front so that visitors can enjoy seeing it whilst it is in this unique position.

The Scaffold box which will support and protect the Regency chandelier. 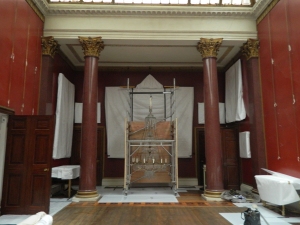 The chandelier in its temporary position within the Picture Gallery

With the chandelier down you can really see some of the detail and construction up close! Come and have a look for yourself when the Mansion re-opens on March 2nd or on one of our Winter Tours on Friday, Saturday and Sunday whilst the house is still closed.