This week’s post covers the work carried out by Lord Berwick and his wife upon moving into Attingham Hall in 1921.

In 1919 Thomas, 8th Lord Berwick married Teresa Hulton in Venice and following their honeymoon in Europe, they came to live on the Attingham Estate. Initially they lived at Cronkhill with the view to get tenants for the large mansion. 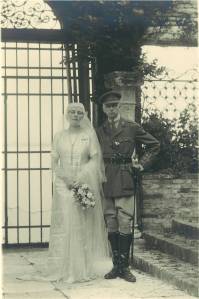 In 1919 Lord Berwick married Teresa Hulton in Venice, where she had grown up as a girl with her family. 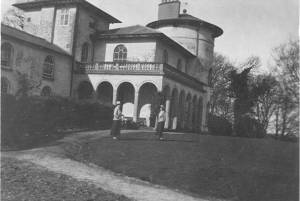 Lady Berwick with her sister, Gioconda, at Cronkhill c.1920.

Eventually they managed to get a tenant, but for Cronkhill, and so in October 1921 they reluctantly moved into Attingham. One of the benefits of moving into the large and neglected house was that it had electricity, unlike Cronkhill, which was still lit by oil lamps and candles. The electric light at Attingham was something Lady Berwick was looking forward to.

Lord and Lady Berwick on the Portico steps, 1920.

Throughout the 1920s and 30s, Lord and Lady Berwick embarked upon a project to restore Attingham to reflect the appearance and contents of the house during its heyday in the early 1800s. They used the 1827 bankruptcy sale catalogue to guide them in their purchases and made use of replica fittings in an appropriate ‘historical’ style when period fittings were not available or were too expensive.

The cut glass dish fitting in the East Ante Room was bought in 1927 in Paris and is a good reproduction of a Regency design. 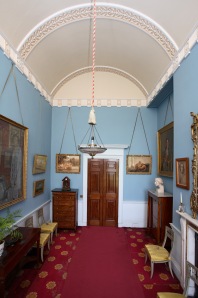 The alabaster bowl fitting which hangs in the Inner Library was purchased in 1927 in Paris and was supplied to light this room.

Light fitting purchased by the 8th Lord and Lady Berwick in the Inner Library at Attingham Park.

The ormolu lantern which usually hangs in the Nash Staircase, but is currently in store due to the roof project, may have been installed by the 8th Lord and Lady Berwick. It is rather a puzzling light fitting and it appears as though the lantern has been decorated with drops from a broken chandelier. 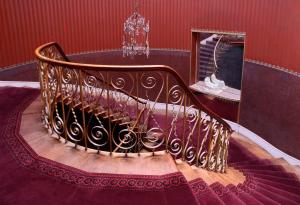 Lantern in the John Nash staircase at Attingham Park.

‘Although Art Deco in period and appearance the fittings are stylistically not entirely out of place with the Regency and First French Empire fittings and furnishings in the house as designs from this period were one of the key influences on Art Deco design.’

The Dining Room at Attingham in 1939 showing the gold uplighters purchased by the 8th Lord and Lady Berwick on the walls.

Maureen also suggests that the sconces in the alcove in the Sultana Room were put there by the 8th Lord and Lady Berwick as in the 1800s there would have been drapery surrounding the alcove and it would have caught fire from candles.

The Sultana Room at Attingham Park showing the lighting in the alcove installed by the 8th lord and Lady Berwick.

Throughout 1921 and 1922, the Alliance Electrical Company carried out further work on the electrical installation at Attingham including re-wiring and converting many period fittings to electricity. 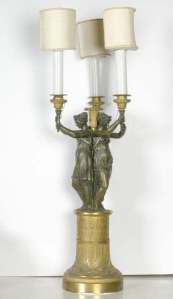 Finally in 1934 the whole installation was upgraded by a team of six electricians who were engaged to put in wiring, switches and plugs and this may have been in preparation for the connection of the property to the National Grid, the first stage of construction of which was completed in 1934. This is perhaps confirmed in a letter to Lord Berwick, dated February 1934, from Gioconda Hulton, his sister in law. Gioconda writes: ‘…the process of installing electric light and power at Attingham must be a complicated necessity. I hope you will be able to recoup something from the old engine. You will miss the note of the ‘Dreadnought’ from the yard.’

The next blog post will look at how we have been working to continue the work of Lord and Lady Berwick to improve the historical accuracy of the lighting at Attingham whilst also trying to reduce our energy consumption.

3 thoughts on “The Renaissance Years”