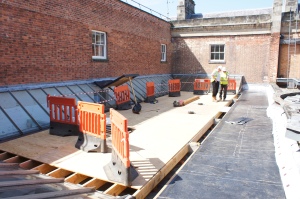 The scaffolding is now nearly completed with the ‘roller blades’ I talked about in an earlier post providing a defence against wind loading on the building. 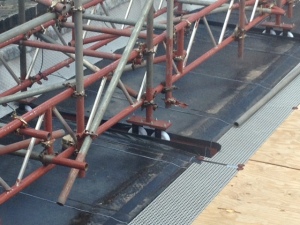 The top of the scaffolding has a temporary roof and plastic walls to provide a completely dry space for the lead to be removed from the Nash Staircase and Jib Stair flat roofs.

Scaffolding before the waterproof roof was installed 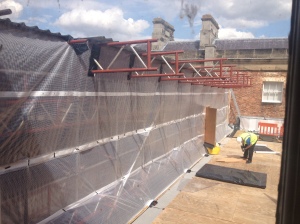 View of the completed scaffolding with plastic walls

Now that the temporary roof is up, we can start to remove the lead to investigate the construction of the Nash Staircase dome and lanterns.

Detail of the ribbed plaster work, dome and inner glass lantern of the Nash Staircase

The dome itself appears to be made of lath and plaster supported by timber curved beams.  Supporting the lead roof are timber beams and a modern layer of chip board.  There are also modern steel Universal Beams (beams which run horizontally), which seem to be providing additional support for the timber joists supporting the lead above.  The modern additions appear to date from the 1970s, so we are scouring the archives to find out when exactly the work happened. 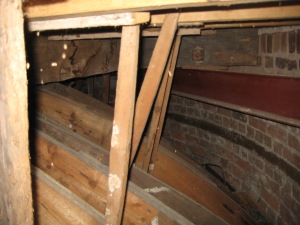 Internal view of the construction of the Nash Staircase drum 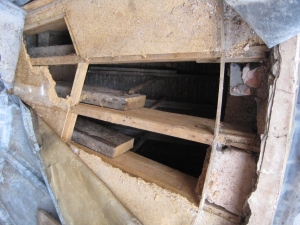 Lifting the lead off the Nash Staircase roof revealing chip board

The outer ‘lantern’ covering the inner stained glass has also been looked at in more detail.  The frame appears to be made from wrought, not cast, iron, but samples have been sent away for analysis.  The frame is in particularly bad condition. 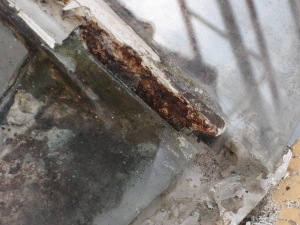 Rusting iron on the outer lantern of the Nash Staircase

Interestingly, closer analysis has revealed that the outer glass was probably originally curved!  It is speculated that the glass was originally in smaller overlapping panels possibly with a scalloped lower edge.  This would have allowed the glass to fit better in the frame; the current ‘flat’  glass sits high above the glazing rebate at the base, whereas curved would have sat better within the rebate.

View through the top floor window into the scaffolding. You can just make out the Outer Lantern.