Here at Attingham, we have been preparing the Mansion for a 1920s Christmas.

Christmas decorations in the Entrance Hall, 2014. © National Trust/R & A Knisely-Marpole

During this decade the 8th Lord and Lady Berwick made Attingham their home following their wedding in 1919. They held parties for the local school children and gave Christmas gifts to the tenants and servants.

To prepare for our 1920s Christmas theme we carried out research in the Attingham archive to learn what Christmas was really like for Lord and Lady Berwick. The couple worked on the interiors of Attingham and they frequently had visitors staying such as artists, writers and musicians. Sadly, Lady Berwick’s father died in 1921 but her mother and sister visited Attingham regularly. 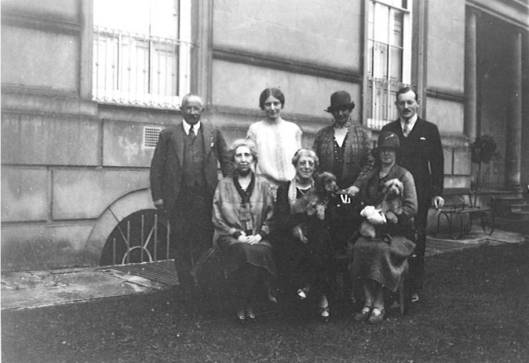 Lady Berwick (in white) with friends and family, 1920s.

We have some examples of Christmas cards that were sent to the Berwicks, such as a 1933 card from the author Barbara Cartland. In 1927 she married into the McCorquodale family who lived at nearby Cound Hall, Shropshire. Earlier, in 1922, Lord and Lady Berwick invited the McCorquodales to dine at Attingham to celebrate the work to put the large Dining Room in order.

To see a 1928 photograph of Barbara McCorquodale at her writing desk, please click here.

Christmas cards did not necessarily have to have a festive theme in the 1920s. In the Attingham collection is a c.1930 card intended to be sent by Lady Berwick to her friends and there is no indication of Christmas apart from the printed text inside.

The tradition of sending cards goes back many years. Greetings cards can be traced back as early as the ancient Chinese and Egyptians who each exchanged messages of good will to celebrate the New Year.

But it was not until the Victorian period that the first published Christmas card appeared. This card highlighted the plight of the poor during the festive season and was made in 1843. Commissioned by Sir Henry Cole and designed by John Calcott Horsley, the card showed a family raising a toast with scenes of charity at the sides. Each card was sold for a shilling. To see an image of the card and to find out more, please click here.

Early English cards were often quite plain and rarely showed religious or winter themes.  But cards soon became fancier with glitter, embroidery, lace and fringes on them. A great deal of work went into making each card. You can view a 1920 British Pathé film about making Christmas cards by clicking here.

Today, cards are a multi-million pound industry, although a growing number of people are making their own again.

Do you keep your Christmas cards or re-cycle them? Many National Trust houses still retain cards once received by family members. To take a look at some Christmas cards from the 20th century, please click here. Search for ‘Christmas card’ and then ‘Explore and refine’ by the date of ‘20th century’.

A Christmas card with a photograph from Mr. and Mrs. Vincent Massey, 1928, of the Canadian Legation, Washington. Polesden Lacey © National Trust / Andrew Fetherston

You can see the 1920s Christmas decorations at Attingham from 10.30 everyday (last entry 3.30) until 23rd December which is the final day to see them. Follow the story of the Berwicks and the local community in the 1920s and enjoy the sparkling lights, baubles and costume. On the three weekends before Christmas you can also see Charleston dancing in the Dining Room by local group, Revel in Dance. For more information, please see our website.