The team at Attingham Park have been busy condition checking and cleaning the fascinating collection of shells kept in a cupboard in the Boudoir. The work provided a wonderful opportunity to show the collection to visitors as the cupboard door is only opened on rare occasions. The shells are sensitive to high light levels and over time, can fade and become brittle. We periodically clean these objects and we do so using a soft pony hair brush. 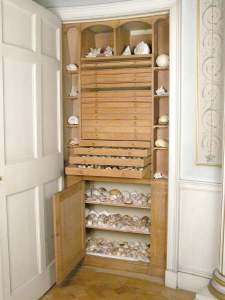 It is important to store shells in the right environment as organic acids given off by certain resins, paints, adhesives and types of wood and cardboard can attack calcareous materials like shells. In damp conditions this causes white growths known as Byne’s disease, so it is important that humidity levels are monitored in the house.

The shells were the collection of Susanna Hill. Susanna was second wife of Thomas Hill, né Harwood, and mother to Noel Hill the First Baron Berwick of Attingham. Previously it was speculated the shells were collected by Sophia, the Second Lady Berwick.

Records show that naval officers were to give sailors a bottle of Arrack (strong wine) in exchange for seashells that they had collected. Such shells would enrich the collections of wealthy ladies like Susanna.
As early as 1744 there are letters recording Susanna’s interest in shell collecting. In 1745 a large box of shells to be sent on to Attingham arrived in the Raven Inn in Shrewsbury. Since she began her collection before the building of Attingham, it may be that the cupboard in the Boudoir was fitted purposefully to house Susanna’s shell collection when Attingham Hall was built for her son Noel in 1782.

Many wealthy people of the time had a cabinet of curiosities where they kept shells and semi-precious stones. Shells were born of the sea just as, according to Greek and Roman myth, Aphrodite/Venus was. Therefore, shell collecting was deemed highly suitable for ladies as a symbol of love and femininity. To view Attingham’s shell collection on the National Trust Collections website, please click here.

Often cabinets of curiosities were formed from items collected on the Grand Tour. However, the shells at Attingham come from further afield. 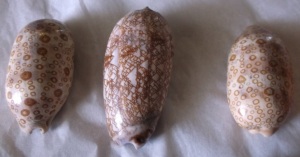 The collection contains many varieties of shell including cowrie, conch, marlin spike, mitre, helmet, turbo, conus, volute and liguus shells. As well as shells there are some sea urchin shells, seahorses and the egg of an ostrich, which lays the largest eggs of any living bird. The shells originated from places such as the Caribbean and Africa, with many of them coming from the Indo-Pacific. Sailors and naturalists collected shell specimens that would be sold in dealers’ shops.

‘Conchylomania’ started in the seventeenth-century when the Dutch East India Company began bringing back amazing shells from Indonesia. The Dutch shell collector Jan Govertsz van der Aar was particularly celebrated, although the interest in shells soon spread to other countries. Shells and shell motifs were so popular that the mid-eighteenth century Rococo style derives its name from the French for shell. Wentletrap shells from the Philippines were especially prized and sold for vast amounts, equivalent to over £60,000 today!

Margaret Cavendish Bentinck, the Second Duchess of Portland (1715-1785) was an avid shell collector, her collection being the largest of its time. She helped to make shell collecting fashionable for wealthy British women. 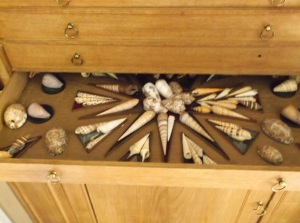 Decorating rooms with shells was a popular pastime for ladies of leisure. Many eighteenth-century ladies, like Mary Delaney and Lady Fane, designed shell grottos and made shell art. The cousins of the Attingham Hill family, the Hills of Hawkstone, decorated the walls and ceiling of a chamber in their grotto with shells, pumice and other ‘petrifactions from the deep.’ Hawkstone Park in North Shropshire is now open to the public. For more information please click here. 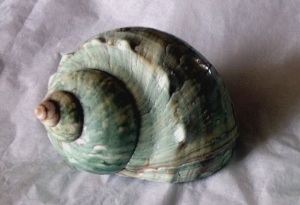 Attingham is not alone in having a shell collection. Many National Trust properties have shells in their collection, from the shells arranged to form a basket of flowers bequeathed by Ellen Terry that can be seen in Smallhythe Place, to the decorative pictures made of shells at Greenway, including two beautiful shell pictures from c.1800 bought by Agatha Christie. Arlington Court and Wallington have particularly good shell collections, the one in Arlington Court having boxes of shells arranged decoratively like those at Attingham. 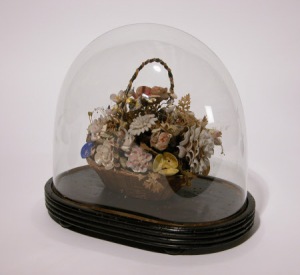 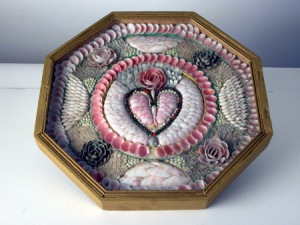 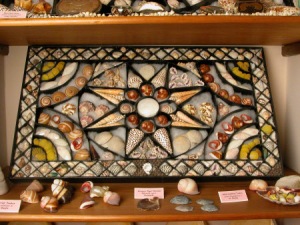 Three images above from National Trust Collections website. Please see links in paragraph above for further details on these objects.

Owsianiecki, C. (2011) ‘The art of the seashell,’ The Examiner, http://www.examiner.com/article/the-art-of-the-seashell